Who's the One with the Good Luck?

The eight exam participants reach Tenrou Island, where they are each required to take one of eight routes that will lead to the next stage of the exam. Lucy and Cana take a route where they are required to fight against Freed and Bickslow in a battle that will determine which pair will be allowed to advance. Lucy and Cana fear they stand no chance against them, but Freed throws the battle by pretending to be weak against women in swimsuits, allowing Cana to defeat him. Meanwhile, Natsu takes the route he believes will lead him to fight against Erza, but is ecstatic to find Gildarts waiting for him instead. 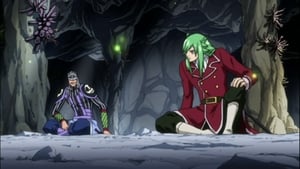