Another World - Departure To Darkness

Erupting without warning to shatter the tranquility of the Japanese nightlife, an ominous pillar of darkness descends from the heavens. Two fearsome creatures soon emerge from the dark column, and proceed to annihilate the warships and attack aircraft that come to greet their arrival, before proceeding to do each other in as well. Watching the transpiring events in amazement are Mary and Joe Hayakawa, two research scientists who would later make the first trip to the world beyond the pillar, which would soon come to be known as Wonderland. A second trip would lead to their mysterious disappearance, and the catalyst for our current adventure to begin. The twin Hayakawa children, Ai and Yu, seek out the hidden subway that leads to the mystifying world that lies beyond the dark column, in hopes of finding the whereabouts of their missing parents. Joining them on their journey is a woman named Lisa, who the twins encountered upon boarding the imposing subway train. Will their journey to Wonderland in search of their missing parents bear fruit? And what of this mysterious man in the black cloak, wielding tremendous power, and summoning great creatures on his solitary quest against the tyranny that grips this strange new land? 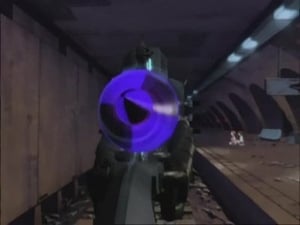