Lisa, the children, and Chobi come to a town completely made of stone statues, even the buildings. Yu thinks he spots his parents and runs after them in a mansion. They find a room full of giant chili peppers called dead peppers. Chobi eats them and turns red and begins moving rapidly. The group separates. Yu follows the two people and is soon captured by a vine plant. Ai falls down a shaft. Lisa finds a small blue boy named Sagi. He asks why Lisa left him alone. Lisa doesn’t understand, but takes him with her. They are captured however as well. Herba brings them together and shows them her Walnut that is a dimensional portal throughout Wonderland to find pieces of Omega. She plans to feed the gang to her Hug Hugs. However, Kaze comes through the Walnut and summons Atomos to suck up the entire mansion. The gang desperately hangs on and Ai has Poshipocket pull out a dead pepper to feed Chobi to save them. Sagi is nowhere to be found and the kids say they never say the boy. Lisa sees a Sagiso flower on the ground and remembers the flower that she left behind when she moved when she was a child. 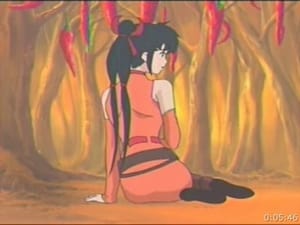