The group is attacked by the same mushroom monster from “Wonderland” but is saved by a herd of chocobos. Chocoimo, Chocobaba’s younger sister, is their herder. She explains about the Ciel Chocobo who was the fastest racer and could fly. Chobi finds a pink chocobo he’s interested in and decides, with Yu’s persuasion, to stay with the herd. Lisa and the kids leave on the subway, but are attacked by Omega’s hair. Chobi sees the statue dedicated to the Ciel and sticks his foot in it, giving him armor and the ability to fly. He flies in and saves Yu from certain death. Kaze comes along and summons Titan to revert the hair to crystal form. 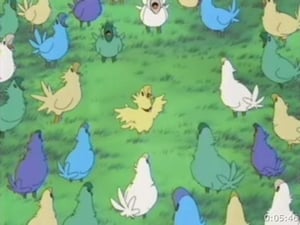