The twins and Chobi are captured by Fungus and sent on his ship. He plans to sacrifice them to the Earl. Makenshi comes along to warn Fungus about his certain destruction. Kaze and Makenshi spot each other and fight. Kaze cannot fire the Magun. Makenshi gloats that Kaze cannot fire the Magun at will anymore. Fungus grows once again and ties Chobi and the twins to his giant club. Crux comes along and uses a black mold on the world, killing the fungus. Fungus’ powers become useless. Kaze uses the Magun to summon Meteor Master to destroy Fungus for good. Fungus respects Kaze in the end and dies with honor. 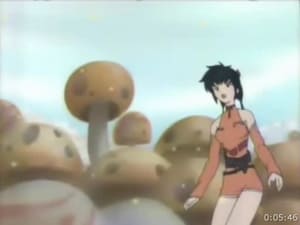