Racing desperately to catch the ghost train before it departs to the next destination, Lisa and the twins wind up watching helplessly as their mode of transportation leaves them behind. Stranded, with no idea as to when the train might return, fate seems to intervene when the thief from earlier appears and leads the stranded travelers to the secret base of the Comodeen – an armed resistance organization training to liberate Wonderland from Earl Tyrant’s rule. It is here that the group is introduced to Knave, the leader of the Comodeen, along with Miles, and the talented inventor Cid. While Ai gets a new wardrobe, courtesy of Miles, Cid is busy marveling over the awesome weapons Kaze sports. After learning of their predicament, Cid agrees to help Lisa and the children catch up with the ghost train, but their happiness is short-lived as Earl Tyrant’s wrath descends upon the Comodeen base. Even as the devastating attack on the Comodeen rages on around them, out of the mist appears the fearsome man that Kaze has been searching for. Makenshi, or White Cloud as he is known to Kaze, is considered his arch-nemesis, whose fearsome Mist Summons can stand up to the power of Kaze’s Magun. 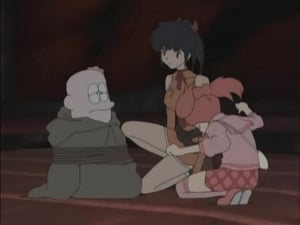