Cid prepares his river vessel, Catharine, to take Lisa, Ai, and Yu back to the subway. Mireth provides them with some instant food, but Pochepoke eats half of it in one gulp, prompting Ai to muffle it. Then they take off, but are interrupted by Fungus, back to full size again, riding a giant serpent named Viking. Now, he starts chasing the group. They manage to get rid of him with the help of several secret James Bond-type gadgets and the chocobo’s super kick… but not for long! A surprise attack damages Catherine. Cid goes insane, breaks out a bunch of weird machines, and hammers Fungus until he’s flat. Lisa, Ai, and Yu run for the subway, leaving a heartbroken Cid behind. However, Fungus shows up again, only to be killed again by Kaze’s Ixion summon. Cid is forced to leave Catherine behind in the explosion. The group catches the subway and escapes. 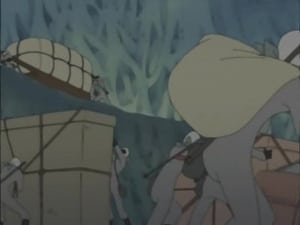