Pist, a Lord of Gaudium, enters the picture now. He explains that he has a plan to stop the Magun. Makenshi participates for demonstration. During his Mist attack, Pist captures the bottle in his watergun. However, as Pist turns around, his watergun is broken due to Makenshi’s attack. The group arrives in a desert area once again. Lu declares her love for Kaze after saving her life and clings to him. Pist makes an appearance to get rid of them. He uses a water gun that captures weapons. Kaze tries to use the Magun, but Pist uses sandgum in the soil around them to steal it for himself. Lu helps the group escape underground through her sonic beams. Pist catches them and counters all of their attacks. Lu blames Gaudium for sending Omega out. Pist says they had nothing to do with it. Kaze dares Pist to use the Magun to destroy them and Pist does. The gun backfires however and returns to Kaze. Kaze replies that the Magun is his heart and cannot be fired by anyone else. Pist returns to Gaudium and reports to the Earl that Omega has been found. The Earl focuses all of his forces to find the pieces of Omega. 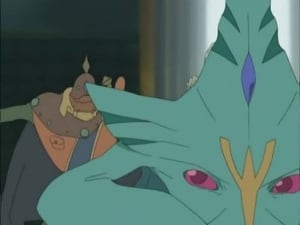