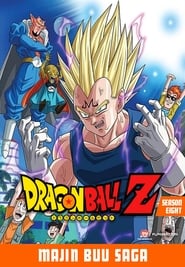 The Majin Buu Saga, also known as Season 8, is the eighth season of the Dragon Ball Z anime. It spans from episodes 220 through 253 in the original Japanese anime and FUNimation dub, and episodes 205 through 238 in the original dub. It adapts chapters 446 to 483 from the Dragon Ball manga. It is preceded by the World Tournament Saga and succeeded by the Kid Buu Saga.